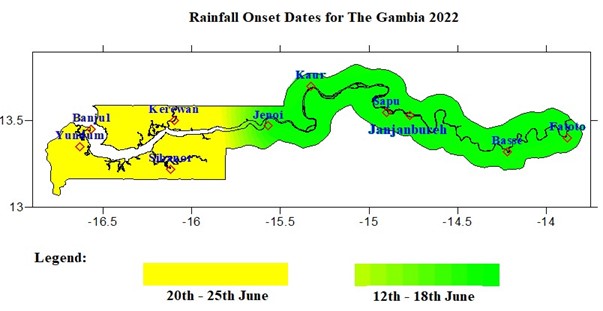 The Department of Water Resources (DWR) produces the Seasonal Rainfall Prediction (SRP) annually in fulfilment of its statutory responsibility to advise the Government and people of The Gambia on all aspects of weather and climate. The SRP gives the outlook of rainfall patterns in The Gambia for the period July-August-September (JAS). DWR produces these forecasts using state-of-the-art forecasting tools and contemporary scientific knowledge. The information presented in the SRP publication is relevant for policy formulation, planning and decision making by operators, stakeholders, and individuals in both private and public sectors in The Gambia. The forecast is particularly useful for operators in weather-sensitive sectors such as agriculture, aviation, construction, water resources, disaster risk reduction, health, energy, trade and tourism, amongst others.

As in the previous years, the prediction was based on the strong teleconnection between     El Nino/ Southern Oscillation (ENSO) and Sea Surface Temperature (SST) anomalies over the Central Pacific Ocean (Nino 3.4 region) and Tropical North Atlantic Ocean and the rain-bearing systems over The Gambia.

On the inter-annual to seasonal time scales, the variability of sea surface temperature in the equatorial Pacific (El Nino / La Nina), tropical Atlantic and Indian Oceans influence rainfall during the period July-August - September in West Africa and particularly the Sahel.

La Nina (or El Nino) conditions often coincide with the wet (dry) summer season over most of the Sahel.

When the Gulf of Guinea is warm (or cool) during April-May-June-July, it is favourable for wet conditions (or dry) over the adjacent countries.

When the tropical Atlantic is cold north of the Equator and warm South of it (or warm in the north and cold in the south), it is favourable for dry conditions (or wet) in the Sahel and wet conditions (dry) over the Gulf of Guinea countries.

For the coming July-August-September period, considerable variations in the amount of rainfall in the various places over the country are expected .

The predicted rainfall amount over the country is predicted very likely to be above average to likely average rainfall for the period of July-August-September (JAS) over the Gambia. The interpretation of that means the country’s average is expected to have rainfall quantity equal to or more than 1000mm in the western sector of the country. Amount in the range of 700 - 900mm is likely over the rest of the country.

Furthermore, it is worthy of note that the 2022 rainfall season is expected to undergo more variability than the 2021 season with events such as early to normal onset, late or normal withdrawal of rains and short to average dry spells. Accordingly, this department will undertake to provide weekly climate and short to medium range weather forecasts to better anticipate the impacts of intra-seasonal climate events.

Beginning of the farming season (Onset)

In an agrarian economy like in The Gambia, where rain fed-agriculture is predominant, rainfall onset for the commencement of the farming season is crucial. It affects the establishment of crops, agricultural production and subsequently, national economies. Failure in the timely establishment of rainfall onset usually affects farmers. It is essential that, after a given date,    the rain will become fairly continuous and sufficient to provide adequate soil moisture for and after planting is maintained as the season advances for the successful establishment of crops.

In 2022, The Gambia is expected to see rainfall onset between 12th June and 18th June as illustrated in figure 2 below. These dates are expected to be generally early by up to 2 weeks over large parts of the country. Judicious use of these predictions in planning agricultural activities will lead to safe sowing and enhanced crop and food production. This information should be widely available to extension services and agencies that have the responsibility of advising farmers on the appropriate time of planting and varieties to be planted.

A longer than normal length of the season is predicted for most parts of the country. It is expected to be in the range of 120-130 days.

The Flow at the River Gambia is expected to be normal to above normal flow.

For the agriculture sector

In view of the generally wet nature expected of the 2022 rainy season in The Gambia and shorter to average dry spell, it is recommended that farmers, herders, water resource managers, projects, NGOs and authorities:

The overall rainy character expected for the 2022 rainy season in The Gambia, presages the high risk of flooding that can lead to losses of crops, material goods and animal and human lives in exposed localities. To deal with this, it is recommended to:

3.0 Faced with the risk of drought

With the expected normally to below normal rainfall for the 2021 rainy season, long dry spells expected at the start of the season could delay the installation of crops and fodder biomass over most places. The water deficits can indeed lead to planting failures, affect the plant growth, promote the development of insect pests in crops, delay the return of transhumant to the North, prolong the lean season for animals and cause conflicts between breeders and farmers. To prevent these risks, it is recommended to:

Wetlands and flooded areas can be subject to the development of water-related diseases (Cholera, malaria, diarrhoea, etc.). To this end, it is strongly recommended to:

A forecast is just a set of probabilities attached to a set of future events. In order to understand a forecast, all one needs to do is to interpret those bits of information. Unfortunately, there are problems in communicating each element, so that the user of a forecast understands what its producer means.

Following the consistency between the seasonal forecast probabilities and the observed rainfall that has been issued since 1998, we are recommending that the JAS seasonal forecast issued each year in the month of May be used by the policymakers as early warning information.

Timely climate information can lead to important decisions by producers that can dramatically increase productivity windows of opportunity.

Armed with Climate information, important decisions can be made on amounts of food to store for food reserve and excess for sale as envisaged in National Development Plan 2018 - 2021.

Pleased to inform the Cabinet and all those involved in monitoring the agricultural production that the update of the 2022 seasonal rainfall prediction will be made by the Department of Water Resources at the end of June 2022.